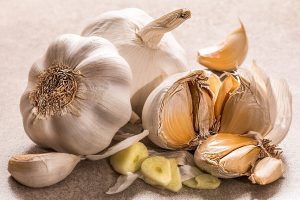 Often called the stinky rose, this pungent bulb can keep colds and flu viruses away. A daily dose gets your viral-fighting abilities in high gear.

Mom’s advice to eat your vegetables is right on. People who eat lots of vegetables are less likely to get sick. But one vegetable in particular should be on your eat-to-stay-healthy list, especially during cold and flu season: garlic. This culinary mainstay belongs to the same family of bulb-shaped plants as onions, chives, leeks, and scallions, but garlic is unique because it has lots of sulfur, which is what makes it stinky. It also contains a number of nutrients that have been shown to be good for your health — arginine, oligosaccharides, flavonoids, and selenium. Here’s what you need to know about garlic and immunity.

Garlic Gives Your T-Cells a Boost

Eating garlic can boost the number of virus-fighting T-cells in your bloodstream — important because colds and the flu are caused by viruses. Nutrition scientists from the University of Florida reported in the journal Clinical Nutrition in 2012 that taking aged garlic extract reduced the severity of cold and flu symptoms and that the symptoms went away faster in those who took the garlic extract than among those who didn’t The scientists speculated that the garlic extract worked by boosting participants’ immune cell function.

Garlic as an aphrodisiac? Garlic has been cited for its ability to dilate blood vessels and improve circulation throughout your nether regions, said Judy Caplan, MS, RDN, a nutritionist based in Vienna, Va., and a spokeswoman for the Academy of Nutrition and Dietetics. And having regular sex can kick your immune system into high gear, according to researchers at Wilkes University in Wilkes-Barre, Pa. The researchers found that college students who have sex once or twice a week have more immunoglobulin A (IgA) in their system than those who don’t have sex. IgA, a type of protein, acts as an antibody. It binds to foreign invaders such as cold and flu viruses when they first enter your body and summons your immune system to destroy them.

Garlic Can Be a Stress Buster

It’s no coincidence that you always seem to catch a cold or the flu when you’re overworked or stressed out. A research team from Carnegie Mellon University in Pittsburgh reported in the November 2011 issue of the Proceedings of the National Academy of Sciences that the body loses its ability to fight off infections when it’s constantly under stress. That’s where garlic comes in — it’s been shown to fight stress and fatigue. Garlic can affect your adrenal glands’ response to stress: Eat garlic, and your adrenals produce less stress hormones and thus reduce your level of fatigue. Armed with garlic, you’re better able to stay alert and fight off foreign invaders.

Garlic’s high sulfur content explains the bulb’s benefit as a cold and flu fighter. The sulfur in garlic helps your body absorb the trace element zinc, which is an immunity booster. You can find zinc in whole grains such as brown rice and whole-wheat breads. Here’s a fast recipe to keep you healthy: Saute some minced garlic in heart-healthy olive oil and then drizzle it sparingly on a slice of whole-grain bread.

Garlic May Play Keep-Away With Germs

“Reye syndrome is a condition in which both the brain and liver are inflamed,” says Dr. Adalja. “It is usually caused by a combination of aspirin and a viral illness, but the full cause isn’t fully understood.” It can result from a cold or flu (or the chicken pox), but fortunately it’s very rare. It affects children and teens and can include vomiting, confusion, lethargy, and other mental changes, to name a few. There is no specific treatment, and the outcome varies, with some people recovering completely, some having long-term neurologic consequences, and about 1 in 5 dying. Caregivers should never give children and teens any medications containing aspirin when they have a cold, flu, chicken pox, fever, or similar illness because aspirin has been linked to Reye syndrome.

Most people can consume garlic and have no unpleasant side effects (other than bad breath). But if you take blood thinners such as warfarin (Coumadin) or are about to have surgery, you don’t want to mess with garlic because it can thin your blood even more and make you bleed. Garlic also can cause stomach upset in some people, Caplan said. If you’re consuming lots and lots of garlic to boost your immunity, tell your doctor.